I love doing weird stuff, especially when it turns out delicious: 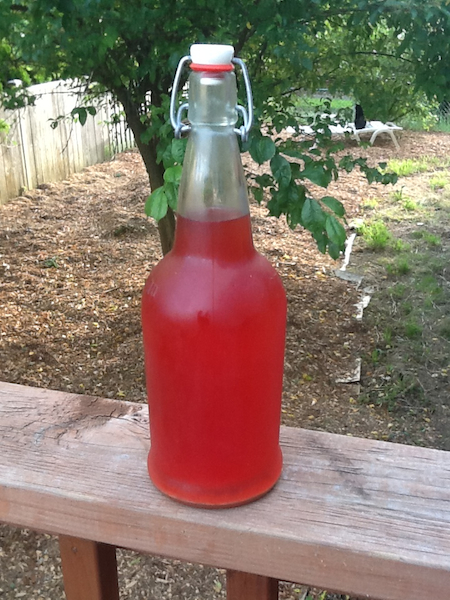 This is a bottle of "cherry drink." I don't know what else to call it. It is sweet, tart, slightly fizzy, and full of healthy probiotics. It's very slightly alcoholic, as in so slightly I don't worry about letting the kids have it. Also it's the prettiest shade of cerise!

I'm a fan of fermenting stuff--pickles, sauerkraut, kimchi, kombucha--and my guiding light in these things is a gentleman named Sandor Ellix Katz. He's just put out a massive book on fermenting all kinds of foods, from fruit, vegetables and milk to meat. It's called "The Art of Fermentation," and it's genius.

I made the cherry drink following his instructions for "country wine": sugar water and cherries in a gallon sun tea jar. The cherries had been frozen, so they didn't have their natural yeast; I added a very little bit of champagne yeast after it became clear it wasn't going to start on its own. I let it sit for three days and then put it up in EZ Caps at the same time I put up a gallon or so of kombucha. Into the fridge.

It's best served very cold, mixed with the kombucha. Very refreshing, pretty in the glass, and good for you.

I'm not a big fan of cherry flavored anything. But this has potential.

any fruit will do

The next batch I did was leftover grape juice and strawberry trimmings. Not as good but still tasty. Artificial cherry is nasty, but fresh cherry is delish.

Is this from the cherries I gave you?

We have a bunch still in our freezer with which we want to make cherry wine.

Ancient ones! That's why I decided to do this; I was cleaning out the freezer and found them. d'oh! Give it a go, it turned out yum. Leave it for 2-4 days and you'll have something the kids can drink.