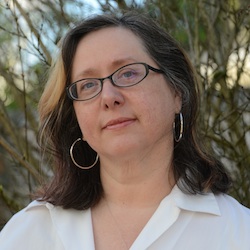 I'm MeiLin Miranda. I write fantasy and science fiction from my 130-year-old house in Portland, Oregon with my husband, two teens, one cat, and far, far too much yarn. I have loved all things 19th century (except for the pesky parts like cholera, child labor, slavery and no rights for women) since my childhood, when I devoured stacks of books by Louisa May Alcott, Jane Austen and Frances Hodgson Burnett.

I've been a professional writer most of the last 35 years, focusing on news and features writing for TV, radio and the web. I was afraid to write what I really wanted to write--fiction--because I was afraid to reveal my self. Writers do that even when we try to edit ourselves out of the manuscript; it's impossible, and I feared what people might see, especially people close to me.

And then I died.

I had a cardiac arrest and near death experience in 2006. I have this weird, probably congenital heart condition; every once in a while my heart decides to squeeze for no apparent reason. I'm okay now, but it's taken me a long while to get better and I still face challenges.

My experiences struggling with my health and the resulting financial near-ruin were the basis for my tweet/prompt to Neil Gaiman that resulted in a story he wrote for the A Calendar of Tales project in 2013. I am November.

I started writing fiction not long after my troubles, in 2007. I tell myself I came back from the dead to write books. I might have come back for that, or for finishing raising my two daughters, or for the husband with whom I fell in love at first sight, or for no reason at all. I like the book explanation, at least when I'm talking about books. When I talk about my family, the explanation changes.

I've written a bunch of books by now: the fantasy series An Intimate History of the Greater Kingdom, the online fantasy western serial Scryer's Gulch, and the shared-universe steampunk fantasy series The Drifting Isle Chronicles. My short fiction has appeared in the anthologies Allegories of the Tarot, Synchronic: 13 Tales of Time Travel, and The Telepath Chronicles. I'm writing a bunch more. I hope you like reading them.

If you've made it this far: I suffered a massive stroke in late 2014. I'm still recovering. I hope to be writing again soon.

Where to find me